Muppozhudhum un Karpanaigal is a horrible mishmash of a psycho thriller, romantic comedy and a sentimental mother-son drama.Having said that, I have to explain!

Atharva jumps off a wall wearing a hooded jacket and terrible makeup. He almost reminds us of Kandasamy and then we suddenly realise that Kandasamy was in fact better than this (if that is even possible). With a sharp device with a handle (perhaps, meant to be a stylish knife), he tries to kill two men who are very evidently utilising some skimpily clad women for their pleasure. They drive off in their car and then the opening credits roll. If you haven’t already left the theatre, I’m sorry for you (as much as I am about myself now).

Story and something to that effect

Ram, played rather uncomfortably by Atharva) is this handsome hunk working in a software company in Chennai where he has this other skimpily clad woman chasing him around to “love” her. She changes the “network password” and therefore no one can do his or her work in this “software company”. Atharva asks her to login with the changed password on his Mac and she refuses to do it unless he kisses her OR says ‘I love you’. He, however, refuses to do so because he is committed to this girl in Bangalore. He talks of her and says, “Oru moonu nimisham ava kitta pesi paaru. Nee ponnungardha marandhu neeyum avala love panna aaramichiduva”! Thereon, it only gets worse.

There are two women playing important roles in the film and then some sidekicks. I’ll get to the sidekicks later.

Ram is in love with this ‘dream girl’ in Bangalore called Charu. She joins him for a project, lives in the same apartment as his, makes his coffee, takes him out shopping, insists he bathes very often and motivates him to pursue his idea for a competition (which is a software that saves people from radiation from outer space that is killing sparrows and flowers). When his mother passes away, she goes to his hometown and feeds him, she takes care of him in his depressed days, encourages him to make his own presentation and lets him sleep on her lap when he is upset. She is motherly, displays no intelligence (her idea for the competition was to write software for banking solutions) and is exactly how a woman should be (as decided by you know who).

Ram is brought up by this widowed mother who is symbolic of how women should be (perhaps in an alternate universe). She gets widowed and brings up her son with the money that her husband had loaned out to a kovil Iyer. One night, a man tries to sexually assault her and in the process tells her that he is doing so because she is beautiful. Oh my god, isn’t it a crime for a widow to be beautiful (on yes, women still have to live in the 16th century)! The next morning she shaves off her hair and becomes ugly and unattractive instantly. Thereafter, men do not sexually assault her and the one who tried that stunt on her earlier also bends his head down while he walks past. She is rude and nasty to everyone else but loves her son dearly. When the son goes to Chennai to make his life, she stops eating and sleeping and dies because she cannot survive without him.

There is this visually challenged woman who uses the phone number Charu used earlier. She takes calls from Ram and talks to him like she is Charu (and has been doing this for years). He is such a darling lover that, this woman now waits for him to call every week. Yikes.

That woman at work who chases after him to love her, Ouch!

Half way through the film, we learn that Ram has motivational delusion and he is hallucinating that he has a girlfriend and she lives in Bangalore, when in fact, she lives in the States and she is engaged to someone else. Motivational Delusion, what I believe is a psychological illness, is treated like some kind of a fancy designation to have. The only cure to the disease apparently is Charu’s death (rip off from Chandramukhi, clearly). However, when Ram learns that she is dead (or rather kidnapped), he comes back home, waits for three days and then hallucinates her returning again and lives happily ever after with her. What makes it worse is how he cannot differentiate his delusion from a real person. When real Charu comes to his house, there is no disconnect and people live happily ever after still! Duh, director! 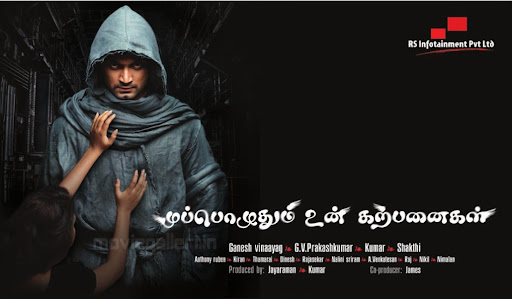 Not only does Ram hallucinate about this woman living with him, but also about a few men who are out to kill her. He believes that these two men (son of a minister and an industrialist) kidnap her. He chases them around (wearing strange makeup) and finally kills them one day. This, however, is perceived by Charu and her doctor uncle as his ability to keep her safe. Fantastic!

There is this Police (uncle of Charu’s) who shows up at many places in the film. The most prominent of all appearances is when he tells Charu, “we both know who committed these murders. But the murdered men are womanisers and criminals. Justice is done.” In essense,the Karnataka Police commissioner does not investigate the murder of his Home Minister’s son out of choice! Fantastic part 2!

Charu and her doctor friend try to stage her kidnap and murder to cure Ram of his delusion. She gets kidnapped, no doubt, but by her fiancée’s friends who tell her how they’ve killed three women before because her fiancée is more to them than a friend or a business partner. Wah wah! Some gay s3x clan killing women dating one of them? Fantastic part 3!

Finally, the doctor uncle saves Charu and takes her to the hospital. For a good measure he also convinces Charu’s father to get her married to Ram and so she goes back to the apartment to fit into Ram’s delusion. Final Fantastic!

In summary, the best thing about the film is G V Prakash Kumar’s Music. Now, that says it all, doesn’t it?!

If you have a funny bone left in you, here’s a look at the director of the film.